Facts. Evidence. Standards. As an attorney, you concern yourself with these things every day, since the practice of law is not a subjective exercise. Everything you do must be fact-based. The arguments you make must rest on vetted evidence. And the strategies you recommend to your clients must comply with professional standards of practice. 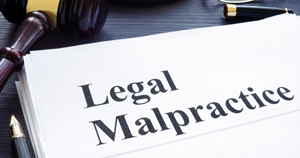 For this reason, it’s helpful to frame any discussion of legal malpractice and risk avoidance the same way: using facts and evidence to quantify the risk you face and suggesting practice standards designed to prevent you from getting sued. Although we could easily generate 100 such risks and remedies, for the sake of brevity we will limit ourselves to six of the former and 10 of the latter. Are you ready to lower your malpractice risk exposure? Then read on.

Malpractice Risk #1. In terms of overall risk, conflicts of interest continue to be the most common malpractice-claim trigger. That’s according to Lawyer’s Professional Liability Claims Trends: 2017, a study published by Ames & Gough, a liability insurance and risk-management advisor to professional-services firms. According to its latest annual survey, seven of the nine liability insurers surveyed said that conflicts were either the first or second largest cause of client lawsuits against attorneys.

Malpractice Risk #2. Lawyers are now facing ever-larger lawsuits in terms of alleged damages. The Ames & Gough survey discovered that the frequency of malpractice claims in 2017 was roughly the same as in the prior year. But the insurers said the severity of their claims continued to rise in 2017. According to Ames & Gough, all nine insurers surveyed, including AXIS, CAN, Huntersure, Markel, Travelers, Swiss Re, and three others, which serve 80 percent of the 200 largest U.S. law firms, said they had claims with $500,000 or more in reserves. What’s more, five of the firms said they had 21 or more such claims, and five said they’d paid a $50 million or larger claim. One each reported paying a $100 million and a $150 million claim, respectively.  Clearly, the multi-million payouts are rare. But that is little consolation if you’re the defendant in that suit.

Malpractice Risk #3. One of the major determinants of malpractice risk exposure is one’s practice area. According to the ABA Standing Committee’s Profile of Legal Malpractice Claims: 2012-2015, personal injury (plaintiff) is the riskiest area of the law in which to practice, representing 18.24 percent of all claims during the period in question. Rounding out the top five, which accounted for just under 70 percent of all claims, were:

Now, knowing this may be of limited value, since it’s unlikely you’ll move to a different practice area just to lower your risk. This is especially true if you’ve worked in that area for years and have developed strong expertise and contacts. Still, being aware of your risks is a useful warning to practice defensively if you work in a high-risk specialty. The good news: practicing law the right way—i.e., in compliance with legal and ethical standards—will go a long way toward inoculating you against malpractice lawsuits, regardless of your practice area.

Malpractice Risk #4. Another risk is the size of your firm.  As you might expect, solo-attorney practices, along with those that have two to five attorneys, are the riskiest firms, with the former generating about 34 percent of claims and the latter about 32 percent. This is according to the ABA Profile of Legal Malpractice Claims. As with the prior point, there’s not much you can do about your firm size except tighten your case procedures and enhance the quality of your client relationships. Not making mistakes and not doing anything to antagonize your clients are highly effective ways to prevent malpractice claims for both small and large firms.

Drilling down on each of these error types is instructive because it reveals precisely which specific mistakes account for the largest share of claims. This can help you implement appropriate practice measures to reduce these risks.

For example, in the substantive category, failure to know and/or properly apply the law accounted for 13.57 percent of all alleged errors, followed by inadequate discovery or investigation (7.82 percent), planning errors and/or selecting the wrong procedure (7.39 percent), failing to know or ascertain a deadline (6.91 percent), and conflict of interest (4.28). Other errors included incorrectly performing a public-records search (3.03 percent), failing to understand or anticipate tax issues (1.37 percent), and making a math error (0.69 percent).

In the administrative category, the most common error type was procrastination in performance or follow up, which accounted for 9.68 of alleged errors in 2011. Losing a file or documentary evidence was the second most common at 7.05, and failure to calendar properly was third at 4.34 percent. Other errors included clerical mistakes (3.54 percent), failure to file a document by the deadline (3.17 percent), and failure to react to a calendared task (2.34 percent).

However, the next category of alleged errors—client relations—are more challenging. These involve mistakes such as failure to obtain consent or to inform a client about a case development (7.02 percent), failure to follow the client’s instructions (5.71 percent), and improperly withdrawing from representation (1.87 percent). These can be difficult because client errors involve the human element. Whenever two people engage in communications in a professional setting, the likelihood of messages being misinterpreted or misunderstood is extremely high. Plus, people have a tendency to establish unrealistic expectations, which set them up for disappointment later.

The final error category involves so-called intentional wrongs. These include fraud (4.53 percent), malicious prosecution and abuse of process (3.43 percent), violation of civil rights (1.27 percent), and libel or slander (0.96 percent). If you’re the kind of person who would willfully engage in intentionally unethical conduct, you might be better off in a different line of work than lawyering.

Malpractice Risk #6. Attorney malpractice hits home with the actual indemnity payments made to plaintiffs. As you might expect, the vast majority of payouts are not large. According to the ABA Standing Committee, just under 40 percent of claims paid in 2011 were in the $1 to $10,000 range. Another 37 percent were in the $10,001 to $50,000 range. Although no one wants to pay $50,000 to a plaintiff, especially if you don’t have lawyers professional liability insurance, such expenses may be manageable if you have sufficient assets. But what about paying $50,000 to $100,000 (an 11 percent possibility) or $100,001 to $250,000 (about a 7 percent possibility)? Would you be as sanguine about that prospect?

Although there are many other malpractice risks, knowing them all is less important than mastering the remedies that will nip most client lawsuits in the bud. Here are 10 crucial ones:

In short, in today’s litigious environment, always strive to understand your malpractice exposures and to conduct your business accordingly. But since you’re human and prone to make mistakes like all lawyers, make sure to shop for and maintain comprehensive, yet affordable, professional liability insurance. If you haven’t shopped the market lately, please visit our 360 Coverage Pros website today to explore your options. 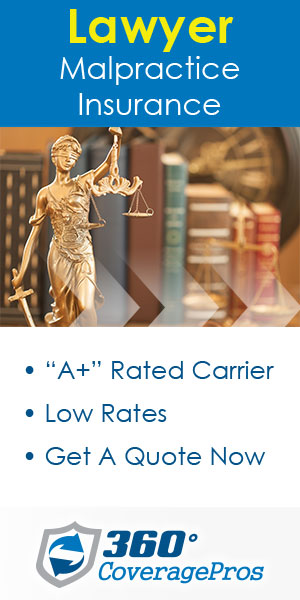