The 5 Most Shocking Maritime Disasters in History 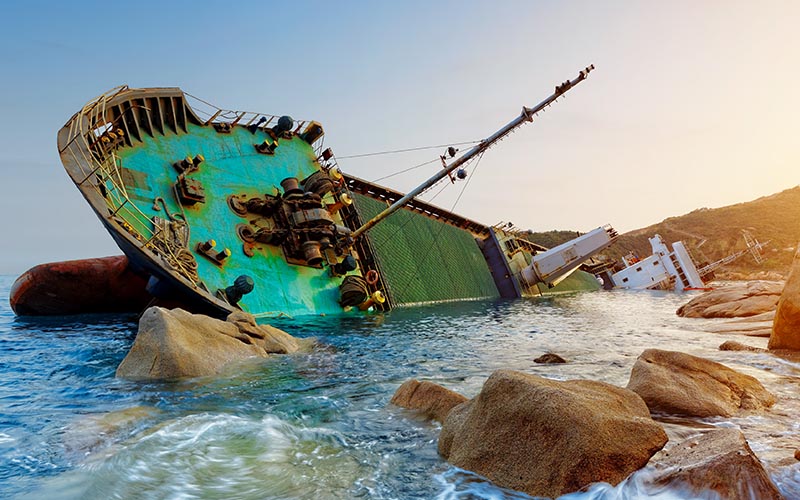 You've worked hard to build your career as a U.S. Coast Guard licensed officer. But, no matter how careful and diligent you may be, accidents can – and often do – still occur. Many of these incidents can even be out of your control.

While most any type of fire, wind, or weather-related events can certainly be devastating, accidents that take place in the ocean or other waterways can often be much worse. Trying to flee from the wreckage in the water can put people in even more danger.

Even if you can't stop a collision, an accident, or even a close call, though, you can protect yourself, as well as your career, from these unexpected incidents—and you can do so with marine license insurance coverage.

Are You and Your Business Covered with Marine Insurance?

Maritime disasters are events that involve one or more seafaring vessels and, because of the nature of marine travel, often lead to loss of life, damage to property, impact on the environment…or all of the above. And, while some of these incidents may happen during wartime, this isn't necessarily always the case.

Some of the worst and most shocking maritime disasters in history include the following:

While your business may not require you to transport thousands of people on the world's waterways, even a seemingly "small" incident can cost you a substantial amount in terms of property damage, liability expenses, or even your very livelihood. That's where having marine license insurance coverage can help.

A marine license insurance policy can provide you with several key benefits, including an attorney who can work to defend your license if the Coast Guard or other issuing authority should question your competence to continue holding the license.

For many years, the insurance solutions that were available for professional mariners have been limited. Most options require a lengthy ordeal for finding the best protection – and with a cumbersome quoting and application process, it could often take weeks or longer to secure any coverage at all.

But today, 360 Coverage Pros offers the protection that marine professionals need quickly, easily, and affordably. Once you have selected a plan from the company's website, you could even have proof coverage in just a few minutes.

How to Secure Marine License Insurance for Professional Mariners

All ships – including those of the military—can be vulnerable to problems from a wide array of sources, such as:

So, even in the clearest of conditions, no one is entirely immune to a water-related disaster. You can, however, protect yourself from the cost and the potential liability that may follow these types of incidents.

At 360 Coverage Pros, we offer Marine License Insurance for Professional Mariners. Our program provides complete coverage alternatives at affordable premium rates. We have a wide variety of options, including protection for many license grades, including:

There are also several customized marine license insurance coverage options available that may more closely fit your specific needs, such as protection for:

Plus, if vessel operators need coverage, this protection can be placed on a group basis for their licensed officers, often at a discounted premium rate.

Marine license coverage is also much more affordable than you might think. Depending on the policy you need, a plan that offers mariners up to $2 million in protection may be secured, starting at just $26 per month.

How to Get Marine License Insurance Coverage Now

Regardless of whether your business takes you on the oceans, rivers, or other types of waterways, you'll have peace of mind, knowing that you have coverage against a wide range of incidents that may occur. At 360 Coverage Pros, our program provides you with comprehensive coverage options at affordable premium rates.

Do you still have questions about how to secure a marine license insurance policy? Need a premium quote? Or, do you want to find out which of our mariners' insurance plans will best fit your specific needs?

If so, visit our website at www.360CoveragePros.com/marine-license-insurance to view all of the additional policy details, to calculate a rate quote, or to start the easy coverage application process. Our fast and secure online application can provide you with the coverage you need quickly—in minutes, not days—from Berkley Offshore, an “A+” rated insurance carrier. So, contact 360 Coverage Pros today.

Or, contact us by phone at (866) 807-3822 and speak to an experienced mariners' coverage representative who can answer any questions that you may have and explain the plan options that are available to you.

We look forward to hearing from you.